Underwater inspections have so far been carried out using divers with manual measuring equipment. This has made the inspection of, for example, ports resource-intensive and costly. With Odense’s Blue Atlas Robotics’ underwater robot, the work is done faster and more precisely – and now the company has received EU support to make the robot even better.

It is difficult to see underwater, but nonetheless important when ports or other large underwater areas need to be inspected. Blue Atlas Robotics’ specially developed underwater robot handles the resource-intensive task that has previously been assigned to divers, and ensures high precision, higher speed and a more uniform data set. Using six cameras, the robot maneuvers completely autonomously and inspects the large area at a constant distance from what it is to examine.

“It is extremely difficult to get a visual impression underwater. Our solution is based on the fact that we have designed a camera system that is unique to the market. The underwater robot has six cameras over a distance of one meter. The cameras are positioned so that entire surfaces will be covered at the same time as it provides a very wide viewing angle. ”

Once the robot has collected enough data in the form of video recordings, it can generate a visual 3D digital model of the area or object it has imaged.

“If the robot has inspected a port, it means that you will be able to see the entire port’s infrastructure in just a few minutes. This is significantly different from today, where underwater inspections with divers result in hour-long recordings that need to be looked through. It takes an enormous amount of time, ”explains Mads Andersen.

The 3D simulation will also make it possible to access the original image material, so that you can, for example, click on specific areas that are of particular interest. 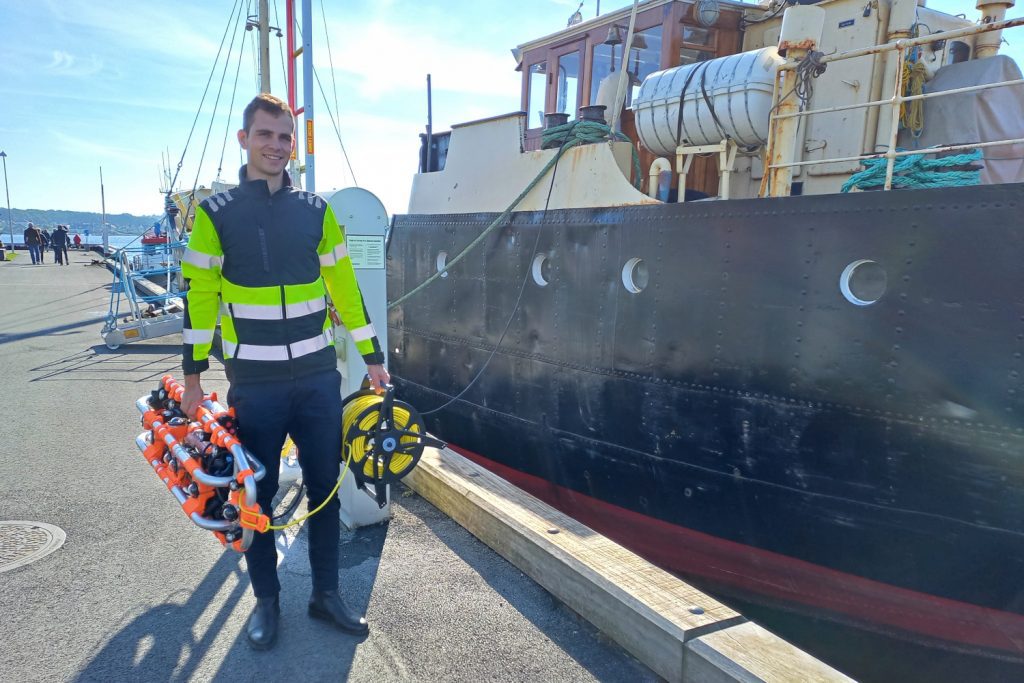 With the newly awarded support from RIMA (a network of 13 European partners, which includes the Danish Technological Institute), Blue Atlas Robotics in collaboration with the land surveying company LE34 will further develop the underwater robot so that it can inspect complex geometric shapes. Today, the robot can navigate even in areas with soft shapes and furrows, but in ports there can be many different angles and edges, which according to Mads Andersen requires a further development of the autonomous navigation technology. 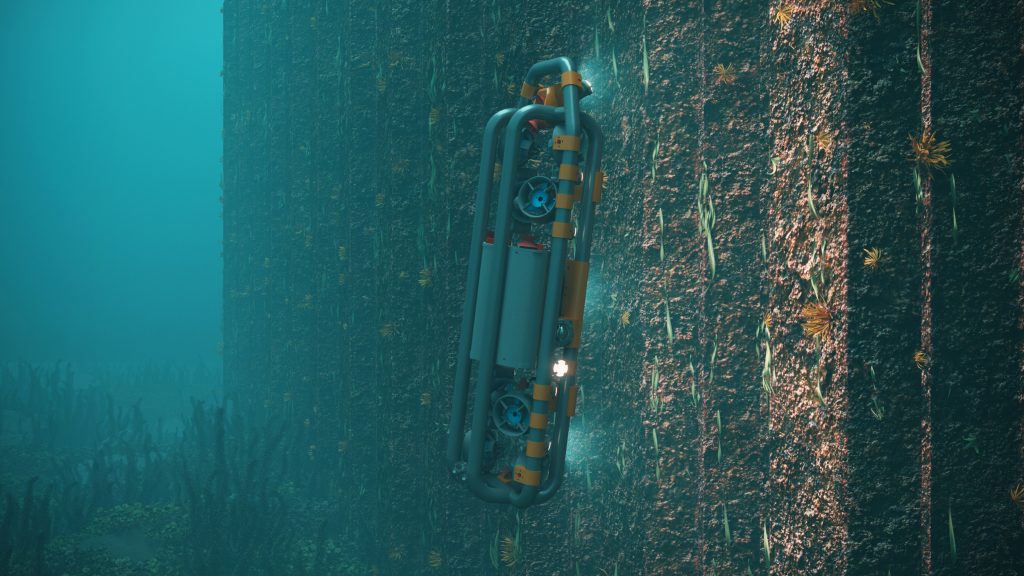 “The project is basically about developing the software so that the robot can navigate on its own along or around the majority of the objects that it will be able to meet in a port,” he says and emphasizes that the result should be in a package solution that matches the requirements of the market in terms of quality:

“When the project is finished in 10 months, we would like to have completed a robot that is functionally ready to be thrown into any Danish port and perform the task to which we assign it. This means that it must be able to scan a given area at a speed that enables us to live up to the operational and customer requirements that exist. ”

The project entitled AUIR (Autonomous Inspection Robot) has received a commitment of up to 150,000 euros (approx. DKK 1.1 million). In addition to the grant, Blue Atlas Robotics will also have the opportunity to receive help from some of the partners behind RIMA, including the Danish Technological Institute.

On the Way to Support
Blue Atlas Robotics has through a collaboration with Erhvervshus Fyn and the Southern Denmark EU office received sparring and guidance in connection with the application to RIMA.

“One of our most important tasks is to help companies succeed in their search for capital and financing,” says business developer and specialist in financing Torben Buch from Erhvervshus Fyn.

“Blue Atlas Robotics is far in the development of their underwater robot, but it requires a large portion of time and capital when, like them, you develop a complex robot solution for the global market. Therefore, it is also positive that we, in close collaboration with the Southern Denmark EU Office, the Innovation Fund and Odense Robotics, have been able to contribute to Blue Atlas Robotics over time having received commitments of more than 2.3 million. kr in soft funding. The founder of Blue Atlas Robotics, Carl Chatfield, moved from Silicon Valley to Robot Valley in Odense precisely to gain access to investors with experience and knowledge of collaborative robots, ”he concludes.

The Road to Capital
Blue Atlas Robotics has previously received support from, among others:

This website uses cookies to improve your experience while you navigate through the website. Out of these, the cookies that are categorized as necessary are stored on your browser as they are essential for the working of basic functionalities of the website. We also use third-party cookies that help us analyze and understand how you use this website. These cookies will be stored in your browser only with your consent. You also have the option to opt-out of these cookies. But opting out of some of these cookies may affect your browsing experience.
Necessary Always Enabled
Necessary cookies are absolutely essential for the website to function properly. These cookies ensure basic functionalities and security features of the website, anonymously.
Functional
Functional cookies help to perform certain functionalities like sharing the content of the website on social media platforms, collect feedbacks, and other third-party features.
Performance
Performance cookies are used to understand and analyze the key performance indexes of the website which helps in delivering a better user experience for the visitors.
Analytics
Analytical cookies are used to understand how visitors interact with the website. These cookies help provide information on metrics the number of visitors, bounce rate, traffic source, etc.
Advertisement
Advertisement cookies are used to provide visitors with relevant ads and marketing campaigns. These cookies track visitors across websites and collect information to provide customized ads.
Others
Other uncategorized cookies are those that are being analyzed and have not been classified into a category as yet.
SAVE & ACCEPT
Powered by